skip to main | skip to sidebar

'Can we develop an app for frogs and toads based on this?' asked Harish, who along with Ashwin came to purchase the book Pictorial Guide to Frogs and Toads of the Western Ghats. Though it was a complete surprise as developers themselves came forward, but I have had a discussion few weeks back with Dr. Sudhira on the same. The first obvious question that came to my mind was what will happen to the book, that was released few months back. 'Good thought, how are we going about it and what will happen to my book?' I asked Harish. Harish and Ashwin smiled at me and the message was conveyed. We exchanged emails, had lengthy conversations, shared folders (to download bulky images, but it was never used fully!),  requested images, expressed some apprehensions and had few weeks of silence in between. But again, it would start with a sms to email to lengthy call and the entire process was repeated for several times. All this started in July 2012 with the on set of monsoon and I have had no clue on how it would be once done.

Lot of bikes, smells of cigarette, an open space where people seems to have immersed in discussion - the picture immediately reminded me of IISc coffee board, but it was not. We were led into a dark room with dusty table, mud walls and good wall hangings. Bottle filtered light, two exhaustively working exhaust fans and dim lights provided the right ambiance. 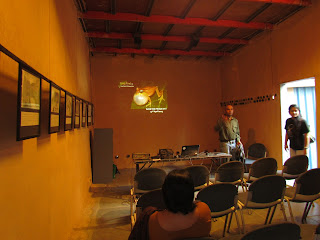 A guy with blue cap arranged about 30 chairs in less than 10 minutes, Priti helped in arranging books and book markers and photography, hot coffee/tea and samosa were arranged by Sudhira and me putting a slide show on the wall that read 'Frog Find v1.0: Frogs and Toads of the Western Ghats' and at the bottom 'Save the frogs day, 27th April 2013'. 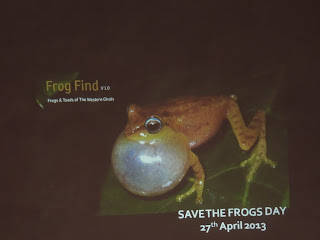 Yes, it was the launching of the mobile app that we discussed 10 months ago. It was arranged at Jaaga. The invite by Gubbilabs had mentioned the event to start at 6:30pm, thanks to Bangalore traffic that chief guests could able to make it only by 7:00pm. It was good to see packed audience with diverse age groups from  5-70yr old. 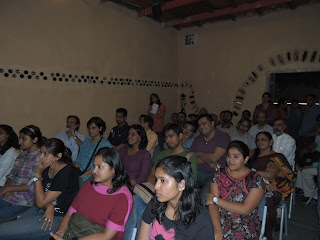 Mr. Seshadri KS, an young, dynamic researcher from ATREE who has worked on diverse aspects of amphibians from road kills to selective logging to pest control to discovery, gave introductory talk on Frogs at Risk. The talk elaborated on evolution of frogs, frog diversity, canopy frog research, discoveries, research on pest control and concluded with risks that frogs are facing and ways to conserve them. 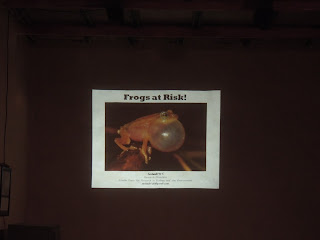 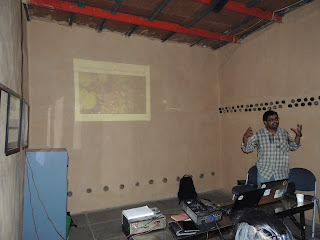 Seshadri is too good! That was an excellent talk!! Wonderful to know about such activities on frogs!!! These were the feedback on Mr. Seshadri's talk. There was a bit of silence, probably that is the only few seconds of silence during the entire programme. People on first floor provided additional orchestra for our audience by their movements and high decibel conversations, added to this was a water pump that worked exclusively for this function. I must thank the audience here, despite all the odds and almost like a oven (with absolutely no air circulation), they stayed with us and supported us till the end.

Frog Find was released by Dr. Karthikeyan S, by touching the screen of a tablet. 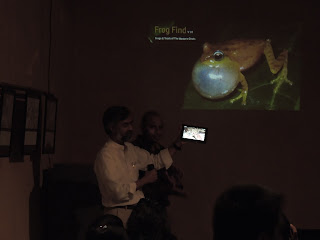 Mr. Harish explained details of the app, feature existing and on future updates. 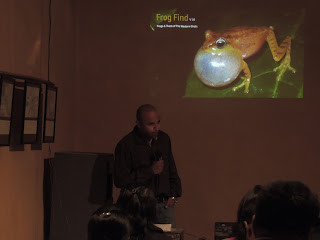 Frog Find thus became the first ever mobile app in India on amphibians. The app facilitates easy identification of frogs in the field and is a standalone. Currently it provides information on 55 species with features like high quality photographs, search options, habitat photos, distribution maps, identification hotspots, ecological status and screen saving options. There were few questions on how to get it, how much is the price, how to get it on other platforms. Sudhira had tough time in answering them, however he was positive that the app will be made available within couple of days and a possible announcement at Gubbilabs website. 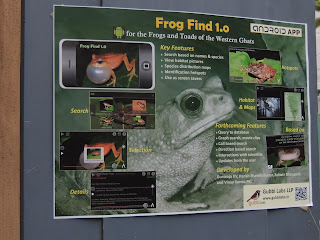 Finally, I am very happy to see such a handy app and would be even happier if it beats my book. Indeed, such is the quality of this app. Thanks to Harish, Ashwin, Vinay for making it happen and thanks to Sudhira, Seshadri, Aravind, Roshmi and Priti for all the support.  Photo credits: Priti G